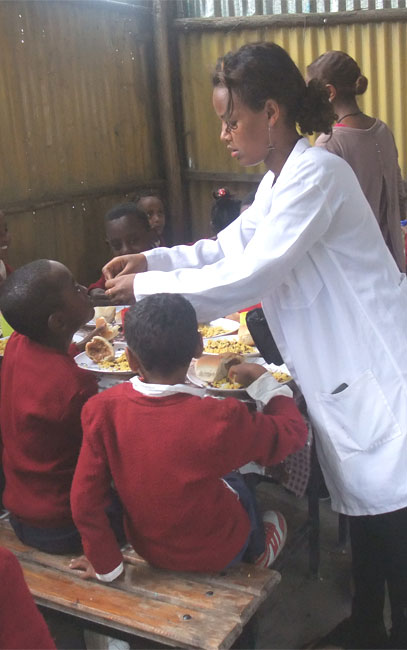 IFA supports and advocates a nutritional plant-based diet for Africa and globally in the fight against poverty and malnutrition. It has been well-documented that meat production consumes a significantly larger proportion of food and resources such as grass, grain and water than a plant-based diet. In addition, meat production feeds proportionately fewer people than the same amount of energy and resources needed to raise plants for human consumption. It is estimated that between 10-20 times more people can be fed on a plant-based diet than on a meat-based diet, therefore there would be more than enough food to feed Africa and the world.

IFA has been working with vegetarian/vegan societies in Ghana and Togo and has been instrumental in the establishment of the first Ethiopian Vegan Association in September 2010. IFA has introduced plant-based feeding as an integral feature of its School Health and Nutrition Program and plans in the future to incorporate it into their Community Health and Development Program in Zemero. The plan is to cultivate sustainable economic development through the growth of power-water-food production capacity. Locally produced wholesome plant foods, in collaboration with the local people, will be grown using an integrated farming approach through a combination of home and community gardens, small farms and fields.

IFA is also committed to supporting the efforts undertaken by the first Vegan Association in Ethiopia, a charitable based organization set up in Addis Ababa in 2010. The Ethiopian Vegan Association (EVA) held the first ever Vegan Food Partners Conference in Addis Ababa in December 2010. This event was organized by IFA with assistance from A Well-Fed-World and VegFund. Participants included members of the Ethiopian parliament (including representatives from the Environmental Protection Agency and Ministry of Agriculture), environmentalists, representatives of various non-governmental organizations, and the Ethiopian news media.