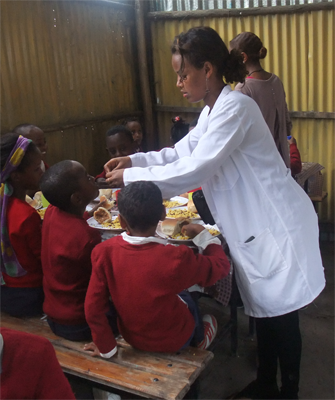 Students are screened and selected to the program in collaboration with the Sub-City Education Bureau following a set of criteria for vulnerability. The program is managed overall by the SHN Coordinator appointed by IFA and a SHN committee appointed by each school to ensure ownership of the program.

IFA advocates Plant-Based Nutrition for its SSHNP which comprises of fruits, vegetables, tubers, wholegrains and legumes. In preparing the school menus, IFA has followed the nutritional requirements of students according to the average age range set by the World Food Program. The menus are high in protein, carbohydrate, vitamins, iron and micronutrients. The absorption of the latter can be affected if a child has a parasitic infection, commonly caused by worms, which can cause internal bleeding. This can then lead to anemia, malnutrition, fatigue and lethargy which affects school performance. For this reason, bi-annual deworming medication is given to all students in the program.